The Enduring Value of the International Criminal Court to Humanity

Judge Eboe-Osuji will cast light on the origins of the International Criminal Court (ICC) and its mandate as the first and only permanent institution of its kind with jurisdiction over the gravest crimes under international law: genocide, crimes against humanity, war crimes, and the crime of aggression. He will discuss the broad-ranging value of the ICC for humanity, arguing that its significance reaches far beyond the readily apparent fields of justice and the rule of law, as the Court’s mandate also bears relevance for the international community’s efforts to achieve durable peace, security, and sustainable development, as reflected in Sustainable Development Goal 16.

Judge Chile Eboe-Osuji, President of the International Criminal Court, has served as Judge of the ICC since 11 March 2012, and he is the Court’s President and Judge of the Appeals Division since 11 March 2018. Prior to joining the ICC, Judge Eboe-Osuji was the Legal Advisor to the UN High Commissioner for Human Rights, during which time he anchored the High Commissioner’s interventions in cases involving human rights questions. In that capacity, he led the writing of amicus curiae submissions to the European Court of Human Rights and the United States Supreme Court. He served as principal appeals counsel for the Prosecution in the Charles Taylor Case at the Special Court for Sierra Leone, and has held several posts at the International Criminal Tribunal for Rwanda, including Head of Chambers and Lead Prosecution Trial Counsel. 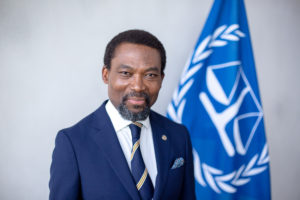