The Registrar of the ICC will present on the Court’s situation from his unique internal perspective. The Registrar performs similar functions as a Secretary-General in other institutions and organizations. Mr von Hebel will explore the reform processes taken within the institution in recent years as a respond to the need to adapt to new and unforeseen challenges. The Registrar will similarly touch upon the current global and situation specific environment in which the Court operates and fulfils its ambitious mandate, and provide an outlook of the future identifying key opportunities that can allow the Court to position itself in the years to come. 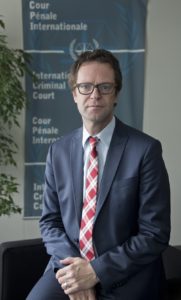 Prior to joining the ICC, he was Deputy Registrar then Registrar of the Special Tribunal for Lebanon (2009 – 2013). He also served as Deputy Registrar then Registrar of the Special Court for Sierra Leone (mid-2006 until 2009). From 2001 until 2006 he was senior legal officer at the International Criminal Tribunal for the Former Yugoslavia. Mr von Hebel began his career in the Dutch government where he worked in various capacities from 1990 until 2000 at the Ministry of Foreign Affairs and the Ministry of Justice. During that time he was part of the Dutch delegation at the negotiations of the Rome Statute, which led to the establishment of the International Criminal Court. He studied international law at the University of Groningen, the Netherlands (1981 to 1987).

You are welcome to bring a lunch sandwich for the seminar.