Minister of Foreign Affairs of Palestine

Palestine on the road to independence

Dr. Riad Malki is the current Minister of Foreign Affairs in the state of Palestine and has previously been the Minister of Justice. He has also been the General Director and founder of Panorama Center for the Dissemination of Democracy and Community Development in Palestine between 1991 and 2007, a member of the steering committee of the Orient House in Jerusalem, a coordinator of the Arab Program for Democracy promotion and development, a member of the steering committee of the World Movement for democracy and a council member of Pugwash Conferences for Sciences and World Affairs. 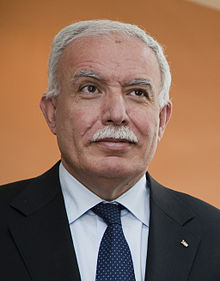 Dr. Riad Malki was awarded the European Peace Prize in 2000 in Copenhagen as well as the Democracy Courage Award in 2004 in South Africa and the Italian Peace Prize Lombardi region in 2005.

Between 1981 and 1996, Dr Malki was a professor at Birzeit University. He holds a Ph.D in engineering and has contributed to several books as an author. He has also been a visiting professor at many different European Universities.