Marriage for all: a walk through of the decision and effects of the Advisory Opinion 24 of the Interamerican Court of Human Rights

The seminar concerns the process of the landmark decision of the advisory opinion 24 issued by the Interamerican Court of Human Rights, and how this was used in Costa Rica by an evangelial conservative homophobic preacher to make it to the second round ballot and almost becoming the president of the most solid democracy in Latin America. The seminar is interdisciplinary and raises political, juridical and pyschological aspects on the quest to achieve marriage equality in the America. 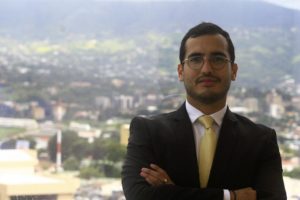 He is the Founder of Hduarte Lex and Fundación Igualitos and an International Bar Association Human Rights Committee Officer. He has been presented by the Financial Times as an out-standing top 50 LGBT Future Leaders. He has been ranked by Chambers & Partners Global Guide 2017 & 2018. He is a board Member of the Rule of Law Initiative Association from Costa Rica and a board Member of the Costa Rican association for Procedural Law.

Registration: scilj@juridicum.su.se, preferably by 18 May 2018.