In his latest book, “Territorial Disputes and State Sovereigny” (Routledge 2020) Dr. Nunez departs from the fact that many sovereignty conflicts remain unresolved around the world. 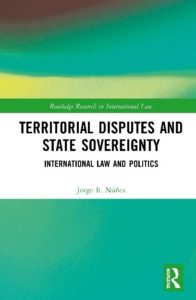 Current solutions in law, political science and international relations generally prove problematic to at least one of the agents part of these differences. Arguing that disputes are complex, multi-layered and multi-faceted, Dr. Nunez brings together a global, inter-disciplinary view of territorial disputes in his book. At the seminar Dr. Nunez will present his research regarding territorial disputes and state sovereignty.

He further reviews the key conceptual elements central to legal and political sciences with regards to territorial disputes: state, sovereignty and self-determination. Looking at some of the current long-standing disputes worldwide, it compares and contrasts the many issues at stake and the potential remedies currently available in order to assess why some territorial disputes remain unresolved. Finally, Dr. Nunez offers a set of guidelines for dispute settlement and conflict resolution that current remedies fail to provide.

Biography of Dr. Jorge Emilio Nunez: Dr. Nunez started his academic career, teaching “Introduction to Law” in 1997 in Universidad Nacional de La Plata, Argentina. He was later awarded his PhD at The University of Manchester. He joined MMU as a Lecturer in Law in 2013 and has also taught Law in Beijing, China-EU School of Law.

The research of Dr Nunez is mainly in the field of legal and political theory and public international law and relations. His latest book entitled “Territorial Disputes and State Sovereignty: Internati

Dr. Nunez has published several articles worldwide in three different languages—i.e. English, Spanish, and Russian. Furthermore, he has presented and delivered papers in several international seminars and congresses, mainly related to legal and political theory and international law. He is also member of several academic and professional organisations across the globe

Due to Stockholm University being physically closed for visitors the seminar will take place via Zoom, same time. Please inform Katarina Fast Lappalainen of your participation by 14 September. Use the following Zoom-link: https://stockholmuniversity.zoom.us/j/69710911606